Gold Bulls Return, But Will They Stay?

Gold is now around $1,900 on inflation concerns and the Central Banks’ determination to keep interest rates low.

What a Big Base You have 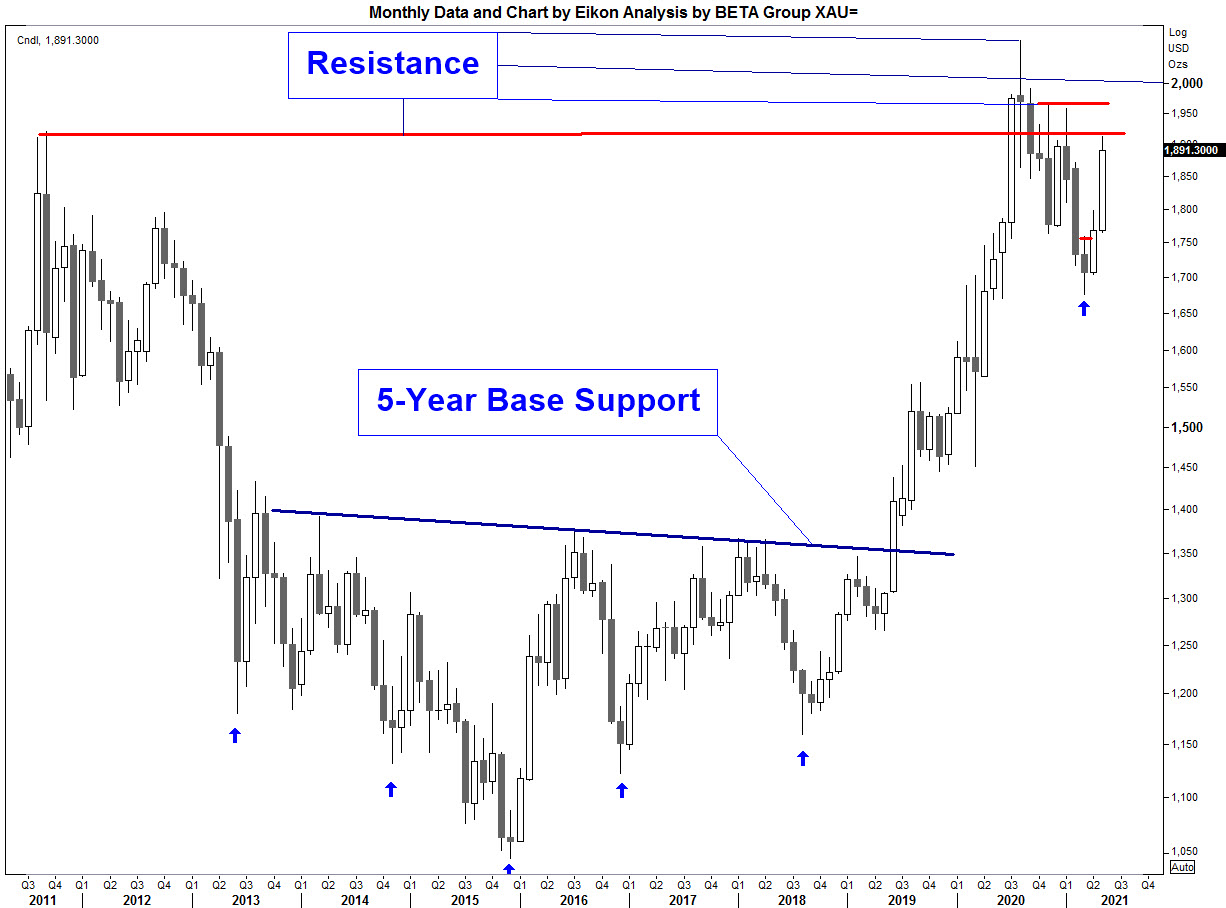 Some technical analysts called the base a Saucer pattern, and some said it was a Complex Reverse Head and Shoulders chart pattern.

Either way, the width of these patterns indicated three things: Gold had turned bullish; it would break to the upside; the move up would be considerable.

But time in the $1,900’s was short-lived. Gold fell brutally to $1,700 over the next six months. The broad bottom in Gold implied a big move up would follow.

It swung to a new all-time high but faded quickly. In March, it reversed up again as inflation fears took hold. There was a small Double Bottom at $1,640, supporting consolidation from May 2020.

The latest move from March to now has taken the price $200 higher.

The move since March has had a lot of technical power.

The 20-Day Simple Moving Average has crossed up through the 50-Day. This tells us the intermediate-term trend is up and strengthening.

Wilder’s Average Directional Index is high and rising. It tells us the trend is strong and strengthening.

Gold Better than US Stocks 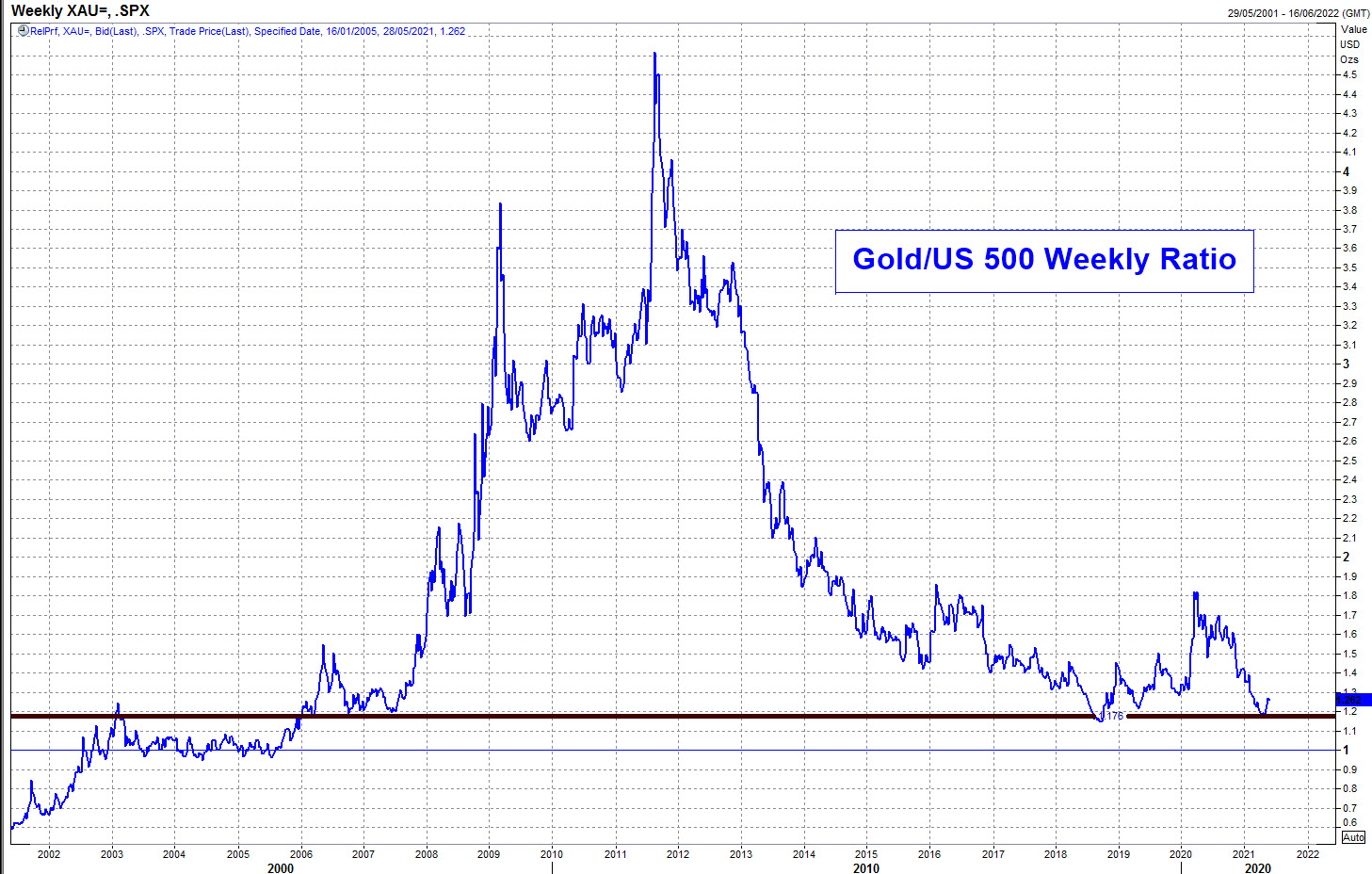 The ratio between the US500 and Gold is bottoming at a significant technical level. It has recently bounced at 1.2.

The seven-year fall ended there in 2018, and we had a period when Gold was best which lasted until early 2020.

The 1.2 ratio level is significant was because it supported the relationship for two years in 2006/7 and launched the golden days of Gold versus the US500, which ended in 2011 at a heady 4.6!

Going back further into the earliest years of the century, 1.2 had provided resilient resistance.

From a long-term perspective, 1.2 is a solid – even a floor – for the Gold versus US Stocks ratio. We can expect this year’s bounce there to develop further. The message is clear: Gold is better to hold than US Stocks. 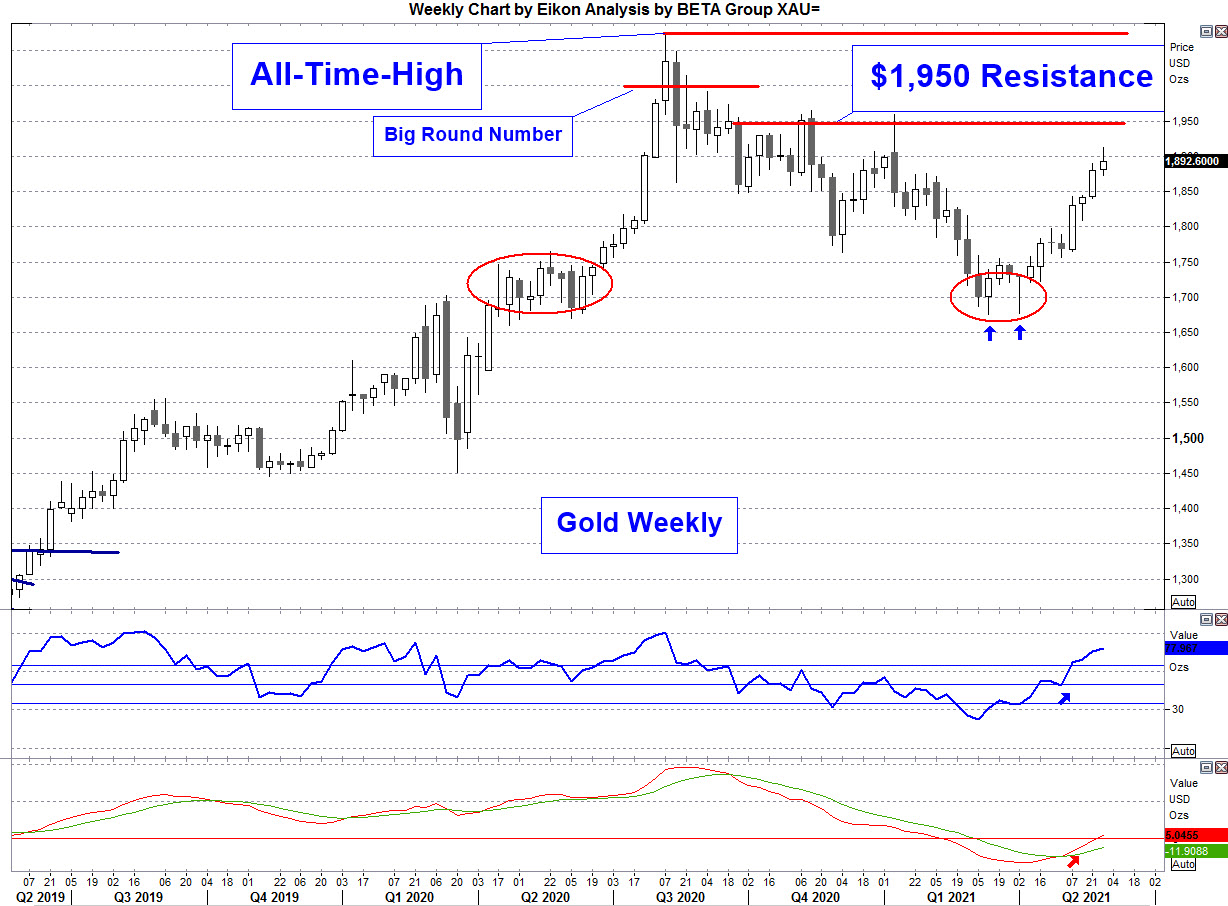 If we look back at the Gold price chart, there are two highs and consolidation of trading activity at $1,960.

This chart resistance has caused Gold to falter in the past and must be surmounted to move up. It will be a significant level for Gold, and we can expect some hesitation there.

But momentum is strong and strengthening. The indications are that, after a pause there, Gold should burst forth.

This would finally obliterate the resistance of the big round number of $2,000.

But resistance at the all-time high is not technically strong and will most likely offer only a little block to further advances.

Gold Bulls Return, But Will They Stay?

Gold is attractive again versus the US stock market.

The 2021 advance is substantial and is strengthening. There are three hurdles. There is chart resistance at $1,950.

The other two – the $2,000 round number and the $2,072.5 all-time high are not stiff resistance points and should be cleared relatively easily if the $1,950 resistance becomes support.