Stocks climb despite lower volume ahead of data 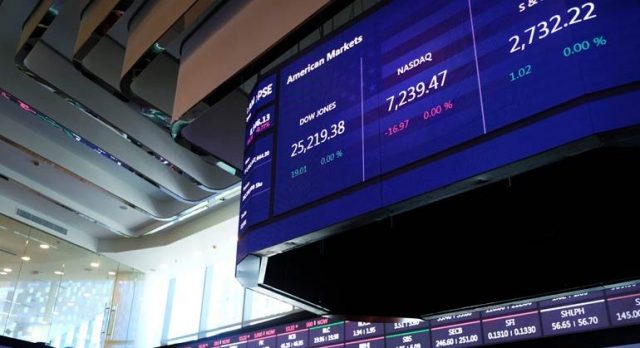 PHILIPPINE shares climbed on Monday even as trading volume declined as most investors were waiting for the release of the country’s June inflation data.

“The local market rallied for the third straight day on lackluster volume as investors await the inflation data which will be released [on Tuesday],” AB Capital Securities, Inc. Junior Equity Analyst Lance U. Soledad said in a Viber message.

“The PSEi inched higher on lower trading volumes, led by gains in property and holding firms. Monday has always been a slow trading day as most markets abroad are still closed for the weekend,” AAA Southeast Equities, Inc. Research Head Christopher John Mangun said in an e-mail.

“There is a lot of optimism among investors as most are willing to hold and even add to current positions as the economy recovers. However, everyone will be watching the inflation figures that will be out later this week, and any unwelcome surprises may cause a sell-off,” Mr. Mangun added.

A BusinessWorld poll of 14 analysts held last week yielded a median estimate of 4.3% for June headline inflation, matching the midpoint of the 3.9% to 4.7% estimate of the Bangko Sentral ng Pilipinas for the month. That is faster than the 2.5% print in June 2020 and the central bank’s 2-4% target for the year, but slower than the 4.5% in May.

“We expect the market to move sideways for now as the sustained trading above the 7,000 level is not yet supported by heavy volume,” AB Capital Securities’ Mr. Soledad said. — Keren Concepcion G. Valmonte