The Philippine Manufacturing Purchasing Managers’ Index (PMI) sharply fell to 49 in April from 52.2 in March, “to signal a marginal contraction in operating conditions across the Filipino manufacturing sector.”

Last month’s PMI slipped below the 50 neutral mark that separates deterioration from expansion, ending three consecutive months of growth or since December’s 49.2. 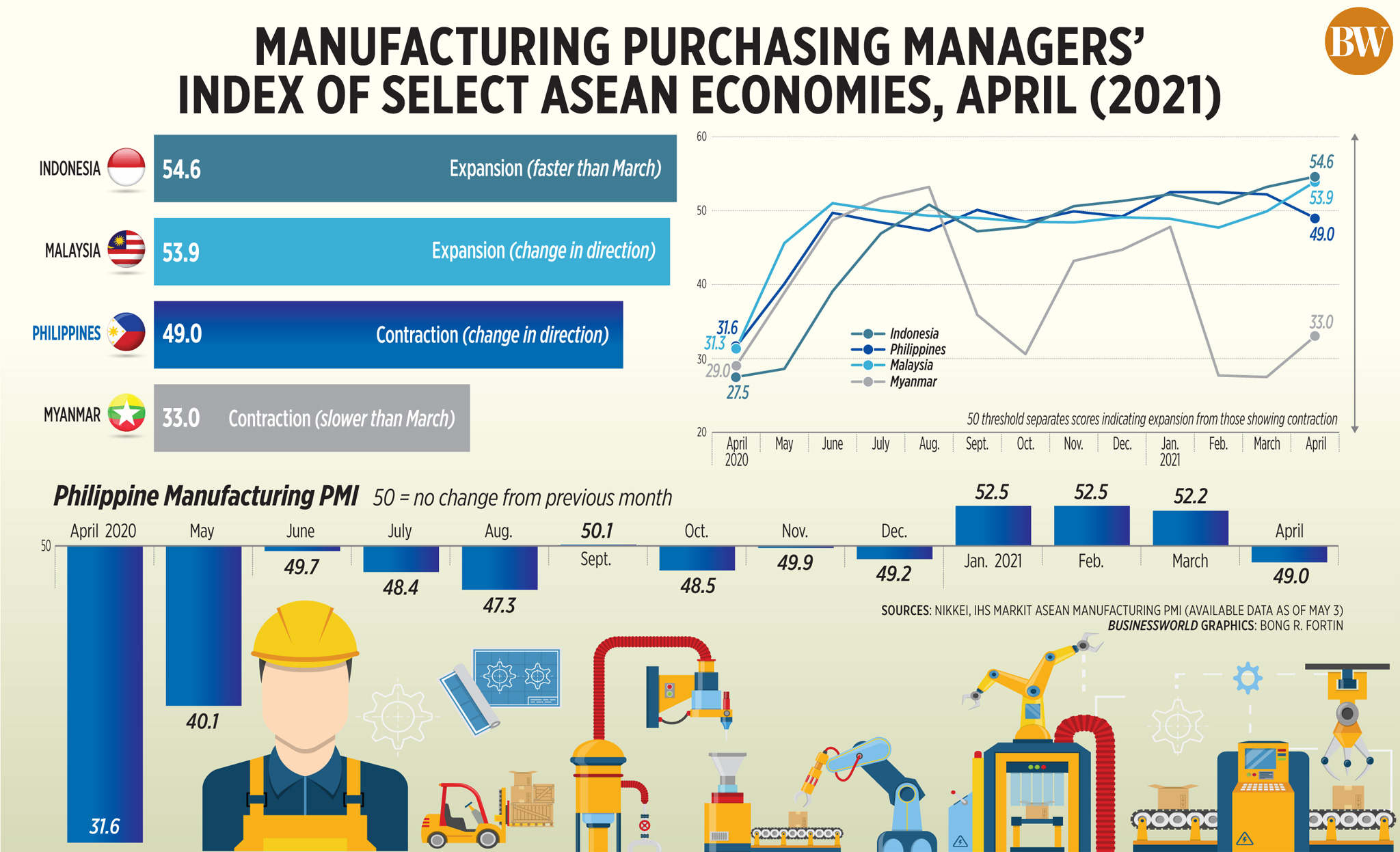 The government began tightening quarantine restrictions in Metro Manila, Bulacan, Cavite, Laguna and Rizal in mid-March, to curb a fresh spike in COVID-19 infections. The modified enhanced community quarantine (MECQ) remains in place until May 14.

“April survey data revealed a setback for the Filipino economy, with operating conditions falling back into contraction territory after only one full quarter of growth. Tightening restrictions led to another round of factory and business closures, with output particularly hard-hit. Meanwhile, labor force cuts extended into the second quarter of 2021,” Shreeya Patel, economist at IHS Markit, said in a statement.

The country’s PMI contraction was in contrast to the broad improvement in most Southeast Asian nations where data is available, including Indonesia, Malaysia and Myanmar.

Overall output of Philippine manufacturers dropped sharply in April, with the rate of decline among the steepest in survey’s history.

The lockdown prompted many factories to suspend operations after demand weakened for the first time since December, IHS Markit said.

The drop in local demand was among the steepest decline to date, but partially offset by a pickup in orders from European markets as the rest of the region starts to slowly reopen.

The muted demand forced some companies to trim their hiring plans last month, while voluntary resignations pulled down the employment rate further.

IHS Markit noted that firms continued to lay off workers for fourteen months straight or since February 2020, with the rate of job shedding in April being the fastest in four months.

Despite reduced manpower, the survey showed that there is still enough capacity among local manufacturers as they continue to keep up with the backlog.

“Supply-side pressures and rising costs were again evident throughout the latest survey period with material shortages and transportation bottlenecks widely reported. Firms will hope that these issues are resolved, but with the full impact of the Suez blockage yet to take effect, the disruption to global trade is expected to reverberate,” Ms. Patel said.

Inflation in input costs quickened for six months straight and by its fastest pace in more than two and a half years. Companies partially passed these higher costs to customers, pushing output prices up.

“The IHS Markit report highlighted that the drop off in manufacturing activity was the steepest on record, even more dramatic compared to last year’s plunge during the height of the pandemic, indicating the fragility of the recovery. Hopes at the start of the year remain intact but firms are pinning these rosy projections on expectations that vaccination efforts will be underway soon,” he said.

“Going forward, any extension of the lockdowns in NCR (National Capital Region) Plus in an effort to help reduce new COVID-19 local cases, still relatively higher on a daily basis recently, could result to continued significant reduction in production, sales, net income, jobs, and other business and economic activities, especially for hard-hit sectors,” Mr. Ricafort said in a note on Monday.

While manufacturing activity picked up in most Asian economies in April, Oxford Economics said tighter mobility restrictions is dimming the outlook for the Philippines, India and Thailand.

“While the more open economies should continue to benefit from rising external demand, rising numbers of new coronavirus cases, restrictions to contain the infections and slow vaccine rollout have led us to lower our 2021 growth projections for India, Philippines, and Thailand,” it said in a note on Monday.