THE BANGKO SENTRAL ng Pilipinas (BSP) will likely keep benchmark interest rates steady on Thursday to support the “fragile” economic recovery, with inflation improving on the back of government initiatives to ease supply issues.

A BusinessWorld poll held last week showed 14 out of 16 analysts expect the central bank to retain its key policy rate at its record low of 2% at the Monetary Board’s fourth policy meeting for this year on June 24.

Analysts said it is crucial for the BSP to retain its accommodative stance in the meantime as the economy’s rebound from the impact of the coronavirus pandemic still has a long way to go. 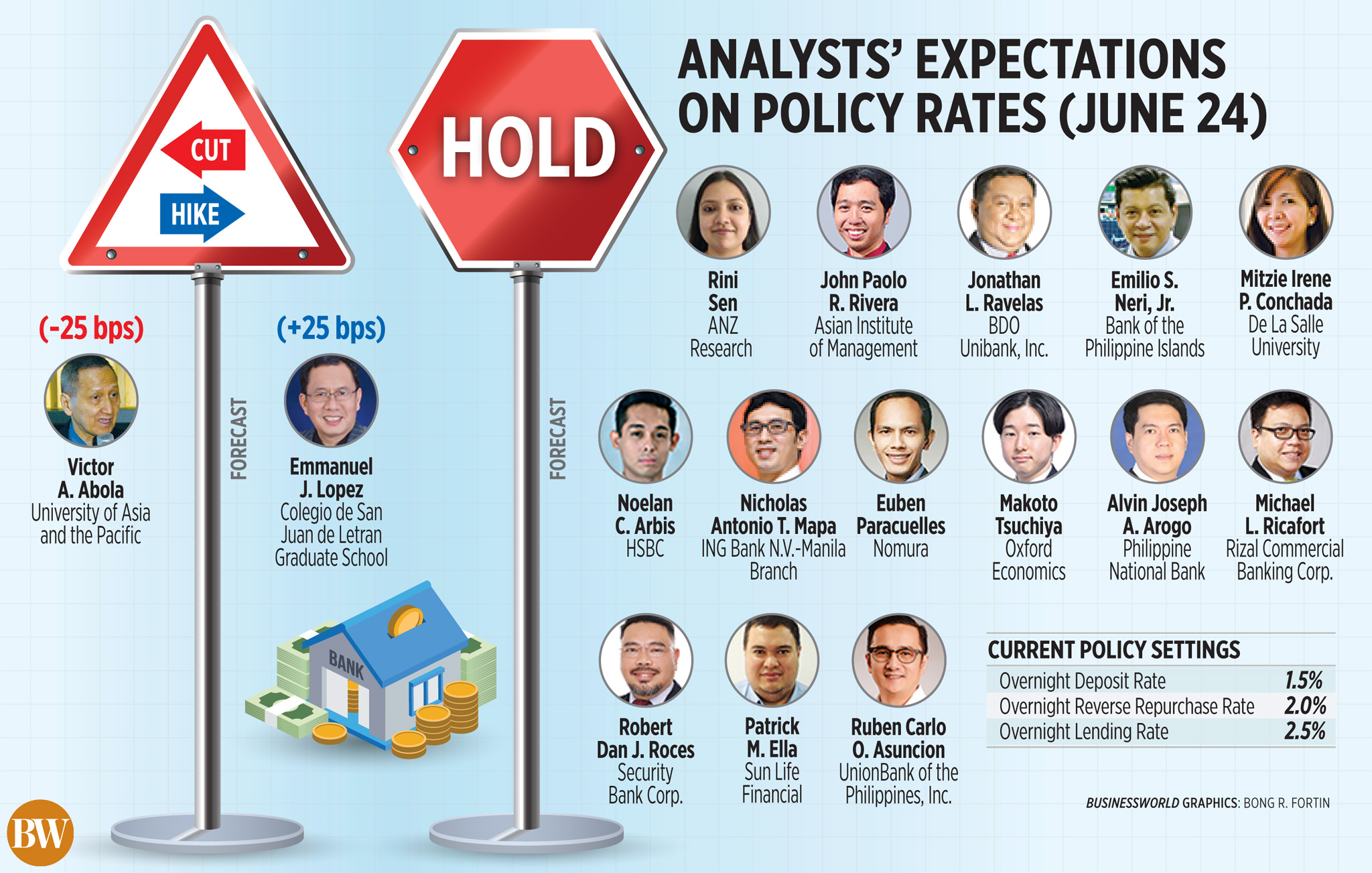 “A calibration of rate settings at this point would derail the very fragile recovery and only delay the economy’s bounce-back,” Mr. Mapa added, noting that the BSP’s adjustments last year are still working their way through the financial system due to the lag in monetary policy transmission.

The BSP slashed benchmark rates by a cumulative 200 basis points (bps) last year. Borrowing costs have been at record lows since the Monetary Board’s last adjustment, which was a 25-bp cut in November.

Aside from keeping rates low, the central bank has also provided stimulus by freeing up liquidity via various easing measures, which have released some P2.2 trillion into the financial system.

Mr. Diokno last week said the central bank will keep its policy stance “supportive of the government’s initiatives to address the effects of the pandemic, for as long as necessary, until the economic recovery gets underway,” which he earlier noted could be in the second half of 2022.

Philippine gross domestic product (GDP) shrank by 4.2% in the first quarter. This followed the record 9.6% economic contraction logged in 2020, which was the worst in Southeast Asia.

The government is targeting GDP growth of 6% to 7% this year. However, multilateral agencies and think tanks have said the fresh surge in infections from March to April, which resulted in the reimposition of strict lockdown measures in the capital and nearby provinces, along with the slow pace of the state’s vaccination program, pose risks to this goal.

Meanwhile, inflation rose by 4.5% for the third straight month in May. While this was slower than the two-year high of 4.7% in February, it exceeded the central bank’s 2-4% target range.

INFLATION PRESSURES EASING
“There’s been some improvement in economic activity in the Philippines over the last few weeks. Daily COVID-19 cases have moderated from the previous peak. Average non-residential mobility has also improved as the government eases some of its more restrictive lockdown measures,” HSBC Global Research economist Noelan C. Arbis said in an e-mail.

“The good news is that inflationary pressures have waned, reducing the burden on the BSP to tighten monetary policy ahead of schedule to curb runaway prices. We believe that current policy settings are accommodative enough, while the need to potentially reduce accommodation has dissipated,” Mr. Arbis added.

“The improvement in the inflation path due to lower tariffs and higher quota for imported pork should reduce the pressure on the BSP to prematurely raise the reverse repurchase rate amid a fragile economy,” he said.

In May, the government temporarily lowered applicable tariffs for pork products and raised the minimum access volume for pork imports for a year. This was in response to the higher meat prices, which was largely to blame for inflation’s surge in the past months.

This is also the case in Metro Manila as more businesses have reopened and expanded their operating capacity, he said.

“The value of the dollar vis-a-vis Philippine peso is slowly gaining ground because of the relatively normal activity in the Western economy as proven by the continued rise in the price of oil and its by-products,” Mr. Lopez noted.

For his part, Bank of the Philippine Islands Lead Economist Emilio S. Neri, Jr. said the BSP could keep borrowing costs unchanged in the meantime but increased volatility in the foreign exchange market could give it a reason to tighten “before the end of the year” as the US central bank unwinds its pandemic-driven easy monetary policy.

“There is a risk, after all, that the FOMC (Federal Open Market Committee) will announce later this year its plans to reduce its bond purchases and magnify currency volatility across the emerging markets,” Mr. Neri said.

Mr. Diokno last week said a possible source of risk to financial stability is how markets would react once the US Federal Reserve cuts its bond purchases and, eventually, hikes borrowing costs. However, he said this is “not an immediate threat” as the BSP has room to “counteract” the impact of the Fed’s tightening. — Luz Wendy T. Noble